“This is stupid,” Turner whispered to his best friend.  “I can’t feel my legs anymore.”

“If it’s so stupid, why are you here?” Seth kept his gaze on the old house.

Turner didn’t say anything.  Instead, he shifted his weight to his other knee and stifled a groan when an ankle popped.  He thought about why he was there.  Mostly, he wanted to keep Seth from trumpeting down the school hallways that he was chicken.  “Maybe we should head back home.  It’s getting late.”  He glanced up at the moon, wishing the sun hadn’t surrendered to the shadows.

“Just like camp last year when you couldn’t sleep without a nightlight.”

“If it’s not the dark, then you must be afraid of ghosts, or vampires.  Or whatever it is.”

Turner hesitated.  “That stuff’s not for real.”  He didn’t know if he believed in the existence of spirits or vampires, but he didn’t really want to find out.  “How do you know the house is abandoned?”

“Duh.  Have you ever seen anyone around?”

“Well, no, but that doesn’t mean anything.”

Turner glanced at his phone.  “Yeah, but I don’t see why.”

Seth rolled his eyes.  “I’m telling you, something funny is going on.”  He pointed to the railing, a patchwork of peeling sea foam colored paint and rust.  “She glides down the hill toward the lake almost every night.”

“That doesn’t make sense.” Turner scrunched up his face in confusion.

“I think she’d scare us more than–” Turner stopped talking when he felt something grip his shoulder.  He turned to Seth and saw the same wide-eyed look he imagined he wore.

END_OF_DOCUMENT_TOKEN_TO_BE_REPLACED 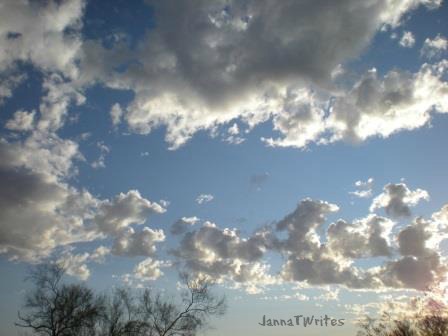 We sprawl in the grass,

pictures in the sky.

as the puffy images pass-

he sees what I can’t find.

next to a Radio Flyer wagon!”

Patient with my blindness,

draws in the air with his fingers.

For a split-second, I do see

my moment of clarity

by absolutes and responsibility.

to do it all again,

my son’s vision carries me.

This is what I came up with for the second week of Quotespiration.  Here’s this week’s quote:

“I showed my masterpiece to the grown-ups, and asked them whether the drawing frightened them.  But they answered: “Frighten? Why should anyone by frightened by a hat?” My drawing was not a picture of a hat.  It was a picture of a boa constrictor digesting an elephant. But since the grown-ups were not able to understand it, I made another drawing: I drew the inside of the boa constrictor, so that the grown-ups could see it clearly.” – from The Little Prince by Antoine de Saint-Exupery

If you’re inspired by the quote, please join in!  All you have to do is write a response in less than 1,000 words, post it on your blog, then go to Anecdote Love’s site and link to that post.

I wanted to bring your attention to another fabulous (super-talented) writer – Suzanne Purkis at Lucid Edit.  I’ve read her writing for a long time now, and her stories always pull me in with her creativity and masterful use of imagery.  Well, Suzanne recently launched a Kickstarter campaign to raise funds needed to help her complete her novel, The Ending.  If you have a moment, please check out her campaign page – she’s got a video explaining her novel, and a link to an excerpt so you can read for  yourself.  If you aren’t able to contribute, I hope you can at least leave her an encouraging comment 🙂

Have a wonderful Thursday!

As a child, I was told more than once to “get my head out of the clouds.”  Of course, those who said it meant that I should quit dreaming and pay attention.  I bet they didn’t know that I would grow up and my eyes would still be on the clouds.

I’ve mentioned before that I love looking at clouds and often see images among the Cumulus and Nimbus clouds.  I thought it would be fun to periodically put an image up for you to share what you see.

Don’t worry – I won’t analyze the results like a Rorschach inkblot test.   And I promise not to share your opinions with any psychological data mining companies (is there even a such thing?)

Have fun!  Come on and play along…leave a comment with what you see in the clouds:

I’ll leave  you with one piece of wisdom.  There is only one problem with keeping your eyes on the clouds…sometimes you miss the rocks in your path.

Maybe it is best to keep your head out of the clouds when your feet are pounding the hiking trail.

As a child, I had way too much imagination packed into my scrawny body.  I’m surprised I made it into adulthood without health complications brought on by the frightening tricks my mind played on me.

In elementary school, a friend scared the wits out of me when she insisted that a man watched us from a nearby hilltop.  We were on the playground with a hundred other kids, but she had me convinced that (1) there was a man – whom I couldn’t see; and (2) he singled us out to stalk.

She kept her fun going when we were at her house that afternoon.  She peeked out her window and (easily) had me believing she saw him.  I was nearly hysterical by the time my parents came to get me.  (In case you’re wondering, we didn’t stay friends long.  After sharing she had supernatural powers, I decided she was the whack job – not me.)

In junior high, I swore the popping and creaking of our settling house was in fact a deranged madman who planned to attack us as we slept.  My ears even heard footsteps on the carpet (coming closer to my room, of course).  Eyes opened wide, I saw nothing but blackness.  With shallow breathing (and very dry eyes) I waited, unable to move.  Oddly enough, I always fell asleep and managed to wake up unharmed in the morning.  Perhaps it was chloroform.

Luckily, my body grew into my imagination.  Instead of my imagination prowling the night like a famished tiger, age has tamed the beast to behave more like a house cat.  Although still fierce at times, it is mostly cuddly and fun.  I don’t miss the tiger, that’s for sure.

Rather than dwelling on frightening scenarios, my imagination finds the unusual in the ordinary.   I see ninjas with machetes in our walls’ texture and Elvis’ face on my toast.  When I look at clouds, I see puppies, rabbits, clusters of balloons or faces. Dead tree trunks take on the form of animals.

This one looked like a turtle with its front legs on the trunk:

I saw an antlered animal’s head peeking above a log:

At first, I attributed these sightings to remnants of my childhood imagination.  Now that I think about it, it could just mean I need new glasses.

What things have you seen that aren’t?  Is it imagination or poor eyesight?

It’s no secret that a child’s imagination and ability to indulge in fantasy worlds are often superior to that of a jaded grown-up’s.  Yesterday, I got the opportunity to flex my creativity in a last-ditch effort to salvage my sanity, which was fading fast.

While working from home, my children fought CONSTANTLY from the moment my older son got home from his half-day at school.  “Mommy, <older son> hit me!” followed by, “Well, he annoyed me!”  Soon after trailed by, “Mooooommmmmm (spoken in two syllables) <younger son> took my toy!” then answered by whining, “He wouldn’t let me play, and I wanted to!”

It would be four hours until my husband got home.  I had to transport my mind somewhere else before I lost it forever.  I closed my eyes and remembered my younger son’s morning playtime.  Hunkered down with his stuffed kitty (aptly named, “Kitty”) in his magical tent made of chairs and blankets, they devised a plan to fight off a bear that waited outside.  He typed stuff in his computer (Lite Brite) by the light of the moon (window above our door.)  Finally, he and Kitty came out and after a fierce fight, they defeated the bear.

I opened my eyes and felt a hint of a smile on my face.  I breathed deeply and exhaled slowly, allowing the calm to flow through me.  I got back to work, only to be interrupted ten minutes later with the tell-tale signs of sibling discord (screaming, whining, arguing, sounds of scuffling, and then crying).  Time for plan B.

I channeled my inner drill-sergeant and got them moving.  In no time, they were picking up toys (“Anything left on the floor will be given away!”), cleaning bathrooms (“That toothpaste better be scrubbed off the cabinet!”), and dusting tabletops (“Whoever has the dirtiest cloth wins!”)  Meanwhile, I released my pent-up frustration into vacuuming the floors.  Back and forth I went over the carpet and tile until the frown lines creasing my forehead smoothed out and my frustration didn’t feel like it would burst through my skin.  By the time we were done, all of us were too tired to argue.  Peace at last.

On occasion, I have mourned the loss of my childhood imagination but, on this day, my goal-driven adult creativity ruled.  And with that, my sanity will live to be tested see another day.

Have a magical weekend!

Which would you rather have:  a child’s fantasy-driven imagination, or an adult’s goal-driven creativity?