Ashley stared at the red numbers projected onto her wall by her bedside alarm clock:  11:58.  For two nights now, the phone rang at precisely 12:15.  Each time she answered, there had been a pause and then the connection broke. Intrigued by the timing (not many people call after midnight) and the origin of the call (The Morrow House, an assisted living facility) she anticipated the shrill staccato that would disturb the gentle snoring of her beagle, Elvis.

As if sensing the internal restlessness of his motionless companion, Elvis, curled at her feet, raised his head and gave her a tilted head glance.

“Come here, boy,” she whispered.  That was enough to convince him to bathe her face in slobbery kisses before collapsing in her arms; his exposed underside the not-so-subtle invitation to rub his belly.  She didn’t know the precise moment when she became lonely enough to look forward to a late-night hang up call, but she suspected it may have been when the door clicked behind Brent as he carried the last of his belongings to his Chevy Blazer. The thought had crossed her mind to beg him to stay, but as much as she wanted to, she could sense he wanted to leave more.  So she let him go.

Six years together disappeared in two carloads.  For the first few months, Ashley expected him to come back, realizing the error in his choice.  Now, going on the fifth month, with divorce papers on her nightstand waiting on her signature, she’d learned that setting one free with the notion he’d return was just foolish hope harbored by the naiveté of a romantic heart.

The sharp ring of the phone cut through the silence, startling Ashley.  Elvis barely raised his head.

“I know you’re there.  Please talk to me.”  She detected two shallow, raspy breaths that made her question her sanity.  I’m asking for trouble.

Ashley let out a surprised gasp.  “My middle name is Edith.”  She rarely admitted it because, although she was named after her great-grandmother, she found it too old-fashioned.  “Who is this?”

She remembered driving by The Morrow House and from the outside, it looked like a warm, well-kept building.

“Do they take good care of you?”

He sighed.  “I suppose.”  He dropped his voice to a whisper.  “But no one took care of the Colonel like you did.”

“What is your favorite meal?”

“Oh, I love to make those.  Most people use chicken, but turkey adds more flavor.”  Without expecting it, she blurted another question.  “What about dessert?”

“I don’t get sweets much but if I could sneak another bite of lemon meringue pie…”  He paused.  “Someone’s coming.”

Before she could answer, the call disconnected.  In an instant she knew what she’d do.  She had recipes for turkey dumplings and lemon meringue pie, passed down in her family for generations.  “We’re going to give David a taste of home,” she said.

Elvis wasn’t impressed. Drool pooled under his loose lips and his eyes twitched beneath closed lids.

She rolled onto her side ran her fingers down his back.  It wouldn’t be long before his steady snore would lull her to sleep.

END_OF_DOCUMENT_TOKEN_TO_BE_REPLACED

He dropped some peaches into his cart.  “Shannon.  You look… great.”

An awkward silence swallowed the seconds.

“I found your favorite creamer.”  A woman dropped the bottle in his cart.

Brian cleared his throat.  “Um, Shannon, this is my wife, Christina.”

Shannon gave a weak smile.  “I hope she treats you how I should have.” She turned and headed toward the bakery before tears betrayed her.

This is my response to Lance’s (My Blog Can Beat Up Your Blog) 100-word song writing challenge.  He provides a song on Tuesday, and gives one week for you to link a story.

This week, the song was “When I Was Your Man” by Bruno Mars.  I think it’s a beautiful song.  So heartbreaking to realize too late that you could’ve given more.  If you’re inspired, check it out!

As for my story, I switched it up a little, making the woman the one with regrets (regret doesn’t know gender!)  There were so many more words that wanted to sneak into this story, but when I finally managed to hit the magic 100-word mark, I called it “good enough”!  I hope you enjoy it.

Have a beautiful weekend!

“I found the tracks in the deep snow between the trees.”

No one pays me mind.

“Something was dragged beside the snowshoe tracks.  I just know it’s my Sasha.”

My desperate plea ignored, I contemplated interrupting the mini dramas playing out around the table.  The family didn’t speak my language, although I’d learned to understand much of theirs since they had welcomed me into their home.

Roberto tipped his wine glass back and guzzled the contents in a most ungraceful way.  After the empty glass clanked on the table, I implored him to help.  “Sasha is in trouble.”

He shook his head and looked beyond me.  “Carlos.  More wine.”

I moved on to Elias.

He violently cracked a pecan.  The shell snapped and shot across the table.  He never turned his seething glare from Lorenzo.  I feared the cracking symbolized Lorenzo’s fate.  Clueless, love-sick Lorenzo swooned under Isabella’s spell.

“Elias, can you find it in your heart to help?”  I pleaded.

An angry swipe sent me stumbling into Isabella.  With her left hand, she soothed my fears, and with her right, she took the orange offered by her love.  Though I had her hand, her attention (and affection) belonged fully to Lorenzo.

I glanced at Cansado napping under Elias’ chair.  He raised his head and, true to his name, lazily dropped his head on the floor as if to say, “Can’t help you, brother.”

Unable to bridge the language barrier, I decided to get some air.  My feet crunched in the snow with each step; the steady rhythm offering some distraction.  I heard faint cries echo in the still air.  Sasha!

I pushed my legs to move as fast they could until I finally saw my Sasha bloodied and beaten.  I tried to get her back to the house, but the snow drifts sapped my strength.  I collapsed and my love rolled into the warmth of my body.  I shivered, but remained determined to give her my last breath if it meant she would live.

Alas, it would not be.  Before the sun rose, her heart stilled.  I kissed her face before trudging back to the house.  I paused when I saw Elias, illuminated by the first hint of morning, pounding a mound of dirt and snow with the back of a shovel.  I hid behind a tree until he stalked away.  My senses overwhelmed, I knew instinctively that Lorenzo’s body and spirit had separated.

I found Isabella’s bed and curled my lanky body at her feet.  Soon, she would awaken and Lorenzo’s death would leave her heartbroken.  I’d understand her loss.  She would go to him, and I’d be a loyal companion by her side.

Our parallel fates made us kindred spirits, destined to draw comfort from one another.

This story was inspired by the Speakeasy #140 prompt which was to write a piece under 750 words (1) with the first sentence of, “I found the tracks in the deep snow between the trees” and (2) with some reference to the painting, Isabella by John Everett Millais.

I found this painting quite intriguing.  As I stared at it for inspiration, I found myself drawn to the dog whose head rests in Isabella’s lap.  So, this story was told from his point of view.

Thanks for reading!  Remember, the Speakeasy prompt is open to everyone, so if you are inspired, feel free to write and submit your own response! 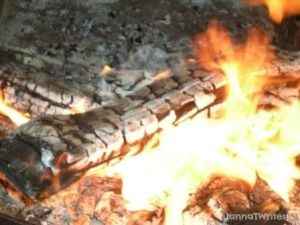 Part of me rested

on the glowing coals,

in what I wanted

This is my response to the Speakeasy prompt, which was to write a fictional piece in less than 750 words using “The smell of smoke lingered in the air.” as the first line and make some sort of reference to William Blake’s painting, The Night of Enitharmon’s Joy. I considered adding some explanation here, but decided I’d rather not ruin your interpretation of the poem.

I did poetry this week because in a comment I made on Calamity Rae’s poetic response last week (which came in third place, by the way), I said I’d write my next response in poetry form.  So I did 🙂

This writing prompt is open to anyone up for the challenge, so click on the badge below to check out all the details!