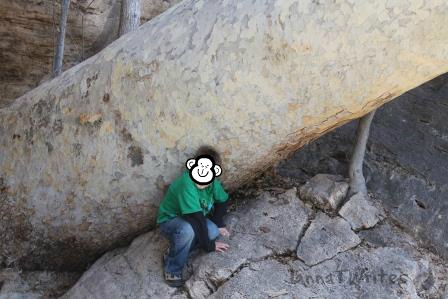 Several weeks ago, we visited Montezuma Well.  From the natural spring, to the vacant Sinagua cliff dwellings, to the Arizona sycamores, I found so much to take in.  (My blog header this month depicts some of the cliff dwellings.)  That visit inspired the haiku above.

We learned that Arizona sycamores grow where there are constant water sources.  This is probably why I don’t recall seeing them desert climate of Phoenix during the twenty-five years I lived there.  Several of these huge trees grew along a stream near the well.  I believe I saw on a sign that the Arizona sycamores are also known as ‘Arizona giants.’  In the photo above, my eight-year-old posed near one of them.  (Even though I call him my little monkey, he doesn’t really have a monkey’s face.  It’s an edit prompted by my paranoia about my kids’ photos on the internet.)

I found the design of the tree bark fascinating as well.  The photo below shows a close up of the bark.  I’d love to know the stories of the past concealed behind the camouflage!

I may write more about Montezuma Well in a future post.  Have a beautiful Wednesday!