Darlene stared at the crumpled-then-smoothed subpoena she’d tossed on the coffee table and contemplated her next move.  The FBI wanted her financial records.  The vortex of bad feelings emanating from that piece of paper threatened to suffocate her.  A big part of her wanted to drown in pity, but the other small part of her psyche urged her to continue.

Several minutes passed before she could convince herself to walk.  She plopped into the wobbly desk chair.  Scott was supposed to fix this.  The thought sent a new wave of emotion through her; a concoction of longing, anger and betrayal.  Darlene still couldn’t accept that her husband was missing, so it was no wonder she couldn’t grasp that her father had disappeared as well.  If Mom were still alive, she’d know what to do.  Finally, her thoughts unlocked the barrier that had dammed her tears.

Darlene blew her nose and dried her puffy eyes.  The list couldn’t wait.  She had to categorize the questions and uncertainties and exhaust the possible explanations.  The truth must be hidden in the midst of it all.  When she finally set the pencil down, she had filled two pieces of paper.

Her attention settled on one line; the thought of going back terrified her.

Before fear changed her mind, she got in the car and she drove for two hours to their cabin on the rim.  The A-frame chalet had been their break from the stresses of city life.  Scott in particular found peace from his usual restlessness while soothed by the low whistle of wind blowing through Ponderosa branches.

Darlene stopped the car in front of their beloved cabin.  She turned the ignition off and stared at the charred remains of their safe haven.  Memories of the fire came back as vivid as that night four weeks ago.  She stared at the jagged edges of the broken loft window.  Her ribs ached as she remembered her desperate leap.

For a fleeting moment, she wondered “why?” 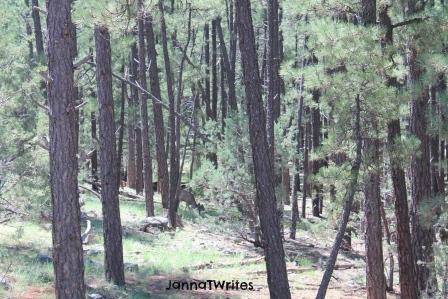 This is a story continuation.  I wrote it in hopes that it would stand alone, but if you want to check out what’s already happened, click the links below:

This piece was written in response to the Trifecta challenge, which was to use the following word in a 33 to 333 word response (mine is 333 words):

EXHAUST (transitive verb):  3a : to consider or discuss (a subject) thoroughly or completely; b : to try out the whole number of <exhausted all the possibilities>

If you’d like to try the challenge yourself, or view the other responses, click on the tricycle picture to link to the Trifecta site.